To celebrate Tiny Rebel's 7th Birthday that was on 14th February they have released a very limited edition Collaborative Can series! 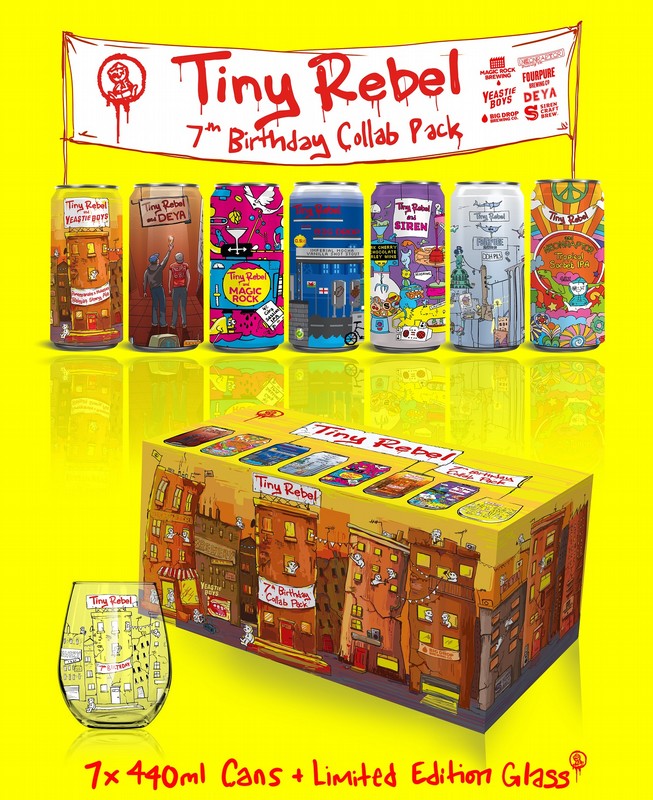 Tiny Rebel collaborated with seven breweries they've been crushing on hard for the last year (at least) to brew some absolutely stonking beers to celebrate another year in the biz. We've got them in 44cl cans as part of the 7th Birthday pack, along with one of the sexiest glasses you could ever own.

There's a few special things about this set. Not only is it Tiny Rebel's first release of 44cl cans (and it definitely won't be their last), each can features unique artwork by our Creative Director, Taz. Each can is standalone - there's no theme, no template or no pre-set formula for Taz to follow. She had total creative control to design a can for each beer individually, rather than as part of a set. As a result, every can is an individual piece of art and you've really got to explore each one to find all the little details and easter eggs, with each one a totally different experience.

Tiny Rebel picked seven of our favourite breweries and invited them to brew a beer that really sums up what they love about them. As a set, it really shows the massive breadth of strengths the UK beer industry has thanks to the huge variety of diverse brewers such as these. With Fourpure, they brewed a DDH Pils, because their lagers are some of the best in the UK. With Deya, it had to be a mega-juicy NEIPA. Magic Rock brew some of the most drinkable, hoppy, sessionable IPAs in the land, so that's what we wanted to brew with them.